The project uses the Alcohol to Jet (ATJ) pathway developed by Swedish Biofuels AB (SB), for production of SAF as a 100 % replacement for standard aviation fuel.

SB ATJ technology was demonstrated at the Pilot Plant scale prior to the start of the Project.

The Pilot Plant has produced SAF to the specification of commercial Jet A-1 kerosene, meeting existing ASTM D7566 certification standards. The Pilot Plant was operated continuously 24/7 close to industrial operating conditions to collect production data and confirm reproducibility of the fuel specification and catalyst life.

The SAF produced was compatible, without blending, with in-service and envisaged jet engines for both civil and military applications. Additionally, ground transportation fuels, both gasoline and diesel varieties were produced. These are equally compatible with existing fuels.

The certification test program for the SAF produced was successfully completed. The Research Report on the SAF test program results has been submitted to OEMs and ASTM, targeting ASTM certification as a 100 % replacement for standard aviation fuel.

To scale the Pilot Plant, the Process Engineering package, and Plant Design for 20,000 t/y of fuel production has been completed. This includes ATJ technology from (i) ethanol and (ii) C2-C5 alcohols, and front-end technology for the production of alcohols from (a) biogas and (b) a mixture containing carbon dioxide and hydrogen.

A Greenfield site was secured on industrial zoned land at Brista near Arlanda airport, Sweden. The location chosen has good logistics regarding distribution. It is a short distance to fuel customers located at Arlanda airport and the plant is sited next to a railcar unloading ramp.

The geotechnical investigation survey and soil environmental technical survey analysis have been conducted for the site and the environmental permit application has been completed and filed. The Basic Engineering for the Demonstration Plant for 20,000 t/y of fuel production at the Brista site, Sweden has been successfully completed and the EPCM contractor, has been chosen. Demonstration Plant construction target timeline for Plant commissioning in 2025. 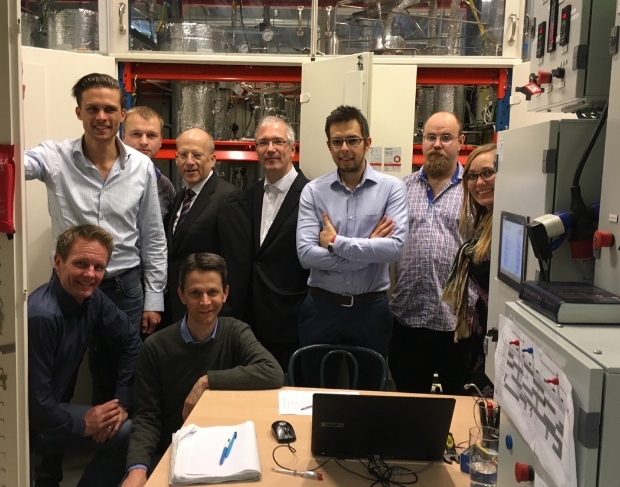 A 3D model of the Demonstration Plant for the Brista site is shown in Figure 1.

Accordingly, the production process uses both ethanol and C2-C5 alcohols to produce SAF. The capability of the Plant to produce alcohols from biogenic CO2 and green hydrogen provides feedstock resilience for the ATJ process.

The current Plant configuration targets production at 50% SAF. This is set by the Project objectives to demonstrate production of other transport fuels, and not by process limitations. The production of SAF can be increased to 85% by changing the Plant process operating mode.

The Demonstration Plant is a technological system consisting of catalytic processes interconnected by process flows. It consists of several production sections, a feed and finished products park, a loading and unloading station for products and raw materials, and auxiliary units to provide the necessary energy resources, steam, nitrogen, and technical air. The plant includes sewage systems, treatment facilities, and a firewater reservoir. 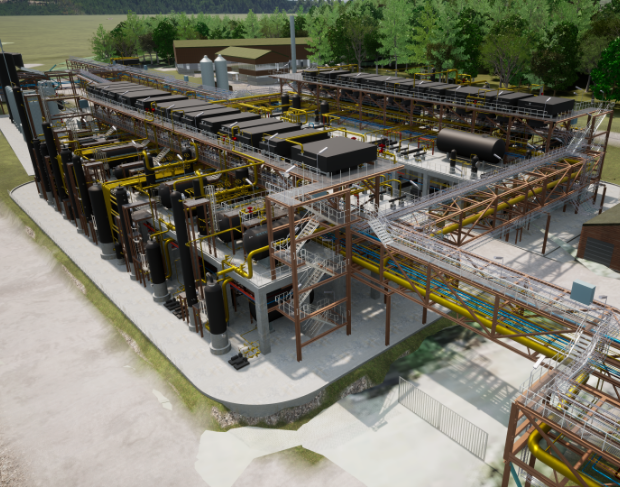 With EU member states, like Sweden, aiming to become fossil-free welfare societies, there is an expectation of deep refiguration of the social system. Some studies suggest that tensions can emerge between demographic groups, their geography, socio-economic status, and gender. With successful commissioning of the Demonstration Plant in 2025, the Project will demonstrate an alternative view of the transition by involving local communities contributing to solving the problem of carbon dioxide emissions from air travel and to have a stake in the emerging low carbon economy.

The Demonstration Plant will establish a local production facility by using local raw materials, including wood waste, to produce SAF and other ground transportation fuels as well as delivering the excess heat from the plant for municipal heating of Stockholm. The established, economically viable, local production will demonstrate one of the solutions to anticipated problems and a path to a smoother social transition. Such a solution will be tested in the first years of operation of the Demonstration Plant. It will demonstrate benefits for the local community as the source of raw materials for SAF production, as well as the recipient of gasoline, diesel, and excess heat. The net emissions of carbon dioxide from the airport and transport hub will be greatly reduced. The local community will succeed in controlling its own ecosystem and provide benefits to the surrounding communities. A successful solution at Brista, in the community of Sigtuna, will demonstrate how other communities are able to become positive energy hubs. 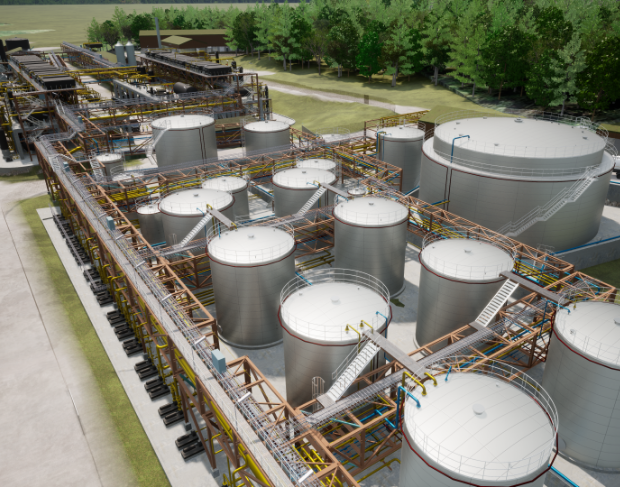 The Air Transport Association (IATA), representing almost 300 airlines https://www.iata.org/en/about/members/airline-list/ from around the world, committed to reduce net carbon emissions to 50% of 2005 levels by 2050.

Even though the various SAFs are the main contributor in achievement of this goal, the SAF market is undersupplied, and needs to grow rapidly.

Despite the present strong social, political, and economic drivers to implement technologies that can contribute to the SAF market, the production increase needed is predominantly driven by rapidly developing EU and individual member state regulations, such as blending mandates, carbon costs and other regulatory measures.

EU blending mandates will reach 3-5% in 2030. Some member states, including Sweden and Norway require that 30% of aviation fuel in the country must be sustainable by 2030. Introduction of penalty fees in Sweden for not complying with the aviation blending mandate is set at 6 SEK per kg of CO2 emitted above target.

Today SAFs are ASTM certified as a 50% blend with standard kerosene for commercial use in aviation. With existing ASTM SAF certification, policy regulatory measures beyond the ASTM blending ceiling have some restrictions. Technological and engineering objectives achieved by the BFSJ project in producing 100% SAF have had a significant influence on policy makers within ASTM, aviation industry, refineries and at the government level.

The pathway developed by SB and used in the project is among the few pathways certified for jet fuel production today by ASTM for use in commercial aviation. But it is the only one targeting ASTM certification as a 100 % replacement for standard aviation fuel. Only ASTM certified pathways are able to respond to the challenges of the transport sector. It is important to understand that while it is necessary that a technology pathway complies with ASTM certification and is approved for use in commercial aviation, achieving certification currently does not reflect production status or likely economics of any particular pathway.

To scale SAF production, and make it economically viable at scale, several advances will be required. The technological challenges must be overcome, a supportive regulatory framework needs to be installed to stimulate demand and innovative solutions to finance the transition must be implemented. Therefore, the result of a project such as BFSJ will contribute to an understanding of the mechanisms needed for short- and long-term governing policy to support the growth of the advanced biofuel market and SAF, in particular.

A life cycle assessment (LCA) of the Process was made to evaluate the environmental performance it has.

The life cycle assessment of Swedish Biofuels process shows up to 93 % reduction of GHG emission compared to standard fossil jet fuel, depending on the type of raw materials used. Well-to-tank emissions results indicate that the Demonstration Plant process produces SAF with GHG values far below the CORSIA minimum requirements, and within the GHG reduction requirements set out in RED II. The source of the ethanol has the most significant impact on the GHG emissions associated with the process, ranging from 23 gCO2eq/MJ SAF using standard European bioethanol as inputs, to 6.6 gCO2eq/MJ SAF, when ethanol sourced from Swedish forestry waste is used. For the process using ethanol from Swedish forestry residues the combination of the low carbon intensity of the feedstock and the low carbon intensity of the Swedish electricity grid yields a very low carbon intensity SAF.

The ability of the process to use biogenic CO2, and green hydrogen as the feedstock for SAF production, can increase the GHG emissions reductions and potentially even lead to negative carbon emissions.

If Swedish Biofuels meets its commercial deployment goals in the first 10 post-project years, the resulting 3 plants are estimated to save 1,900,000 tonnes of CO2 per year in the global transport fuels sector.

7. Main Results Of The Project